ITR 2016 Inside the Marquee

One hundred and seventy nine people attended our 2014 International Rally which took place in Gouarec, a small town which grew up around a fortified castle of which nothing now remains. Many of the buildings are of the local Schist rock with slate roofs. The covered market has undergone a major overhaul which was completed in 2013. The town boasts a bar/restaurant, Créperie, pizzeria, café with wi-fi and a mini-golf course. There is a sizeable supermarket within walking distance of the camp site.

The Nantes-Brest canal which runs alongside the campsite was built between 1811 and 1842. It brought prosperity until 1922 when a dam was built on Lake Guerledan, flooding several locks and stopping all water traffic.

You can still see traces of the metre gauge railway which linked the town with Loudéac and Carhaix from 1901 until 1971.

The nineteenth century church is noted for its fine set of stained glass windows from Pont Aven.

Camping Tost Aven is a quiet rural campsite alongside the Nantes-Brest canal. The camping is informal, garden style with no rigid pitch demarcation. 10 Amp. Electric hook ups available for many pitches.

While the cycling is not flat it cannot be described as difficult. The canal towpath, V6 (Camaret - Vitré) and the Velodyssey, meet here giving a selection of good cycle routes.

This year's rally definitely had a 'family friendly' nature  with lots of  cyclepaths - a huge grassy campsite - no traffic and a selection of family friendly routes in addition to our usual range of rides. We were pleased to be able to include other people on the campsite in our evening social activites.

We owe a great debt of thanks to the local communities of Gouarec and Plelauff who provided the marquee and bar. Also to Bertrand Cocherel and his wife, Lelanda, from Camping Tost Aven who made us so welcome and together with Geoff and Kate Husband, of Breton Bikes, helped arrange many of our evenings.

Saturday evening we started the rally with an invitation to aperitifs with the deputy mayor of Plelauff at the Salle Polyvalente about 4 km. away. Then a rapid return to the campsite where a local group were giving out galettes saucisses and manning the bar which was open each evening
Sunday offered the usual choice of routes through the pretty countryside or a visit to the market at Mon Repos just 20 minutes along the canal path. The evening was left free for tandemistes to socialise and get to know their neighbours.
Monday saw us visiting Callac and Belle Isle.In the evening the Plelauff Comitée de fêtes ran the bar and grillarde providing us with local sausages and frites.

Tuesday was the day to visit the Market in Rostrenen with tandems lined up in the streets. Tandem Games were the evening's entertainment ably organised by a group of our younger members.
Wednesday had no official route suggestion leaving members free to visit places of their own choice or have a rest day. While we enjoyed a paella meal in the evening Trognos Coulos entertained us with some jazzy music.

Thursday took us on a pleasant undulating ride through typical Breton villages including Lanrivain where the local café owner took a photograph for publication in the local edition of Ouest France.
Friday was the last day of tandemimg with visites to Tremarget or Pontivy. The rally ended with the traditional barbecue/picnic with Cochon Grillée, vegetables and potatoes prepared by a local group. The music was provided by a rock band including Geoff from Breton Bikes.

Details of the Rally tandem routes

Articles and pictures in the local paper:

Pictures of the rally can be viewed on our Facebook page and in our showcase.

Map showing the location of Gouarec and camping Tost Aven 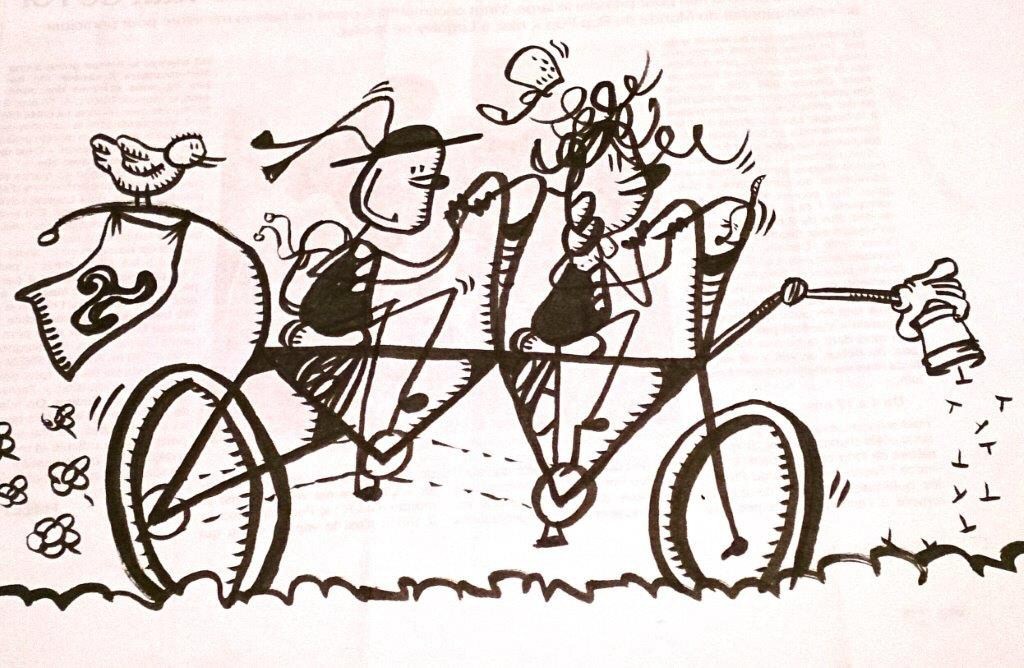